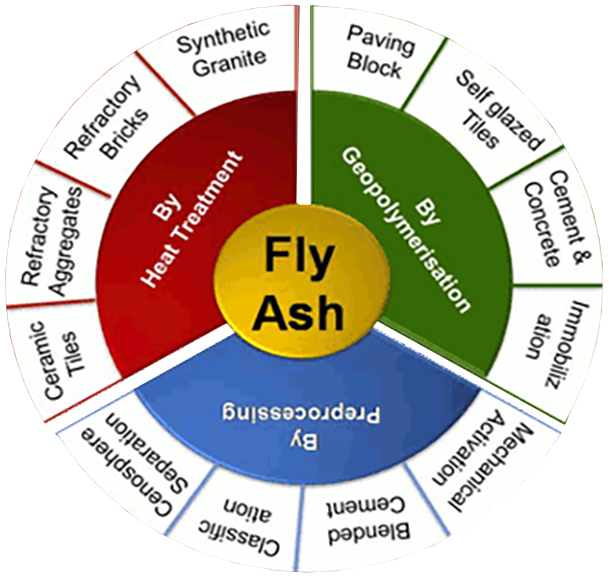 Thank you to the National Metallurgical Laboratory of India. More information can be found at: http://www.nmlindia.org/flyashbasedtechnologies.html

As the previous post (http://greendatabase.org/2016/04/08/ashes-to-ashes-not-anymore/) explains, the use of fly ash in concrete is a great way to make use of a manufacturing by-product, normally transported to a landfill.  Burning coal has a number of adverse effects to the environment.

Coal is a non-renewable raw resource, meaning that only a finite amount of it is available. According to Forbes, the supply will peak between 2020 and 2030, not so far away. In addition, removing coal from its natural environment damages the land and the surrounding ecosystem, and burning coal to generate electricity creates air pollution and releases greenhouse gases into the atmosphere, which depletes the ozone. While using fly ash in concrete gives the coal-burning process a tint of green, we need better long-term solutions to generate energy.

The amount of pollution and greenhouse gases produced by coal plants varies depending on the material composition of the coal and the type coal-burning process used. As a first step toward mitigating the effects of using non-renewable resources, we must optimize coal-burning technology. Developments made in technology, in an effort to reduce the amount of particulate matter and greenhouse gases that coal-fired plants release into the atmosphere. For example, a coal-fired power plant in Ottawa, Canada, the Boundary Dam Power Station, has technology that reduces emissions by extracting the carbon from the coal exhaust and burying it in the ground.

Ultimately, though, the real problem lies in the burning of coal to generate energy. The real answer lies in balance. Building an infrastructure of renewable-energy power plants, such as wind power, solar energy, hydropower and geothermal energy, will not only reduce the consumption of coal but also decrease the amount of hazardous waste and the amount of harmful greenhouse gases released into the atmosphere.