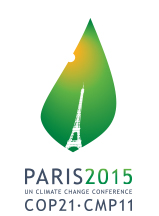 Given his global popularity and presence, Pope Francis’s voice might be the one we need to help us all see that we need to protect the environment just like we need to protect humanity.    The Catholic News Agency reported that the Paris Climate Conference concluded with an adoption of an agreement.  The report stated that “the new deal holds that global greenhouse gas emissions will be cut by half of what is needed to prevent an increase in atmospheric temperatures of two degrees Celsius, according to the New York Times.”

“The agreement also requires that every country participate, putting forward their own plan to cut carbon emissions through 2025-2030. Countries will also be legally required to meet every five years beginning in 2023 in order to publicly report on their progress compared to their plans.”

In his comments, Pope Francis exhorted the entire international community “to promptly continue the path taken, as a sign of solidarity which becomes ever more active.”

The challenge arises in how we could do this without limiting the amount of fossil fuel we burn.  The oil companies are at risk if they can’t sell oil that is already in storage.  The problem is an economic challenge for some, and a scientific challenge for others.  If we revisit the definition at the first Earth Summit in Rio in 1992, written by Bruntland, for the World Commission on Environment and Development (1987), sustainability is defined as “Development that meets the needs of the present without compromising the ability of future generations to meet their own needs.”   We have to keep evolving the conversation and taking action on a global scale so that we can protect ourselves and future generations.