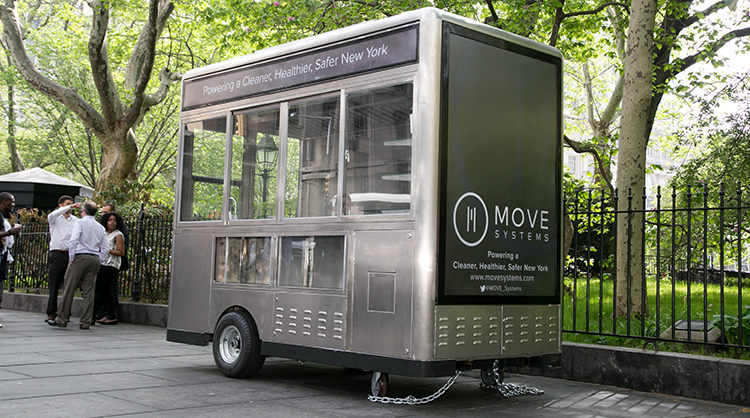 A new pilot program in New York City proposes to cut down on pollution from Food Trucks (also sometimes affectionately known as grease trucks).  According to Margaret Rhodes, most food carts run off diesel generators, sometimes for almost 14 hours, which can pollute the air with carbon monoxide, nitrous oxide, and particulate matter.  The Queens, NY-based company, MOVE Systems, along with the City, plan for the pilot program to cut down on the pollution by more than 60%.

The MRV100 food cart is powered by a mix of battery-generated electricity and solar energy.   While it would be best if it ran on 100% renewable energy, the compressed natural gas used to power the battery is much cleaner burning than most other fossil fuels.  The hybrid generator and solar panels in the food carts remove the pollution equivalent of more than 200 cars off the road.  Certainly a significant improvement.

Besides the environment, MOVE Systems is committed to increasing American-made products and supporting American military veterans.  The manufacturing of the food trucks is domestic, which allows the company to be more heavily involved in the production process than if they manufactured the trucks overseas, while also creating products “in America, for Americans.”  And, the Food Cart Pilot Program will provide a large portion of its initial carts to veterans as a way to help them transition back to civilian life after combat.

MOVE Systems is a company to watch.